4 Reasons Betsy DeVos is Unqualified to be Secretary of Education 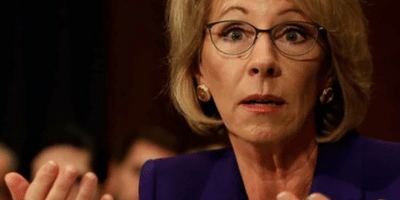 Betsy DeVos is an extremely controversial pick for Secretary of Education. Her three hour confirmation hearing featured many uncomfortable exchanges and left many senators formally requesting an additional hearing which was denied. The vote to confirm or deny will be held on January 31st. Here is what we know about Betsy DeVos:

1. She has no degree in education and lacks basic knowledge of public education policy.

DeVos’ confirmation hearing revealed a startling lack of knowledge about  basic education policy. During one exchange, DeVos appeared not to understand the Individuals with Disabilities Education Act or how it works. (NPR)

Kaine: “Should all K-12 schools that receive taxpayer funding be required to meet the requirements of the Individuals With Disabilities Education Act?”

DeVos: “I think that is a matter that’s best left to the states.”

Kaine: “So some states might be good to kids with disabilities, and other states might not be so good. And then, what? People can just move around the country if they don’t like how their kids are being treated?”

DeVos: “I think that’s an issue that’s best left to the states.”

At this point, DeVos attempted to invoke a Florida program that came up earlier in the back-and-forth, but Kaine insisted on a yes or no answer. Ultimately, DeVos answered: “I think that is certainly worth discussion.”

Later, Sen. Maggie Hassan, D-N.H., followed-up. Hassan: “Do you stand by your statement a few minutes ago that [IDEA] should be up to the states whether to follow it?”

DeVos: “Federal law must be followed where federal dollars are in play.”

Hassan: “So were you unaware, when I just asked you about the IDEA, that it was a federal law?”

DeVos: “I may have confused it.”

Senator Al Franken questioned her about the difference between growth and proficiency which she was unable to answer. He later tweeted “Her lack of basic knowledge astounded me.” According to the Boston Globe,

“The issue of proficiency versus growth is an important one in education policy, particularly when it comes to the issue of standardized tests. Proficiency measures whether students are hitting specific benchmarks for their grade level, while growth is about the academic progress children achieve — or do not. The next secretary of the Education Department will weigh in on this debate, writing the education rules of the incoming administration. The secretary will also have influence over President-elect Trump’s priorities when it comes to education.”

Tell your Senator that Florida’s children deserve a Secretary of Education with the expertise and qualifications to support them and their public schools.

2. DeVos has no experience or exposure to public schools.

Betsy DeVos would be the first person in more than 35 year history of the Department of Education to have never attended a public school or university or sent her children to them. Furthermore, according to Education Week magazine

“She would also be one of only a few secretaries entering the job without experience teaching in a K-12 school, or college; running a university, school system or state education agency, or overseeing public education as a governor, or governor’s education aide.”

With a net worth in the billions, she has many conflicts of interest due to investments in education corporations. According to The Atlantic magazine,

She has ties to several education companies, including Social Finance, which started out as a student-loan refinancing company, as well as companies that sell textbooks and promote online education. The companies she’s invested in will be affected by the choices she makes as the head of the department, including decisions about which companies the government contracts with to handle student loans, and how it oversees different sectors, including online or virtual schooling.

Click here and tell your Senators that students deserve a Secretary of Education who supports students and teachers and understands the issues facing their public schools.

3. She supports vouchers and the privatization of public schools.

DeVos helped launch and has chaired All Children Matter (ACM), a political organization set up in 2003 to promote vouchers across the nation and push for tax credits for businesses that create scholarships for children to attend private schools. According to news reports, the ACM Political Action Committee violated Ohio campaign finance law and as of December 2016, the organization had not paid the fines for breaking the laws, still owing more than $5 million to Ohio taxpayers.

Since 2009, DeVos has served as chair of the American Federation of Children (AFC), an organization that has aggressively led efforts to privatize public education through vouchers. Since 2007, AFC has spent nearly $13.5 million on its pro-voucher efforts, with much of that money coming from DeVos.

In total, DeVos and her organizations have spent at least $33.5 million to support public school privatization efforts.

In Florida, the American Federation for Children PAC consistently funds pro-voucher school board, state house and senate politicians including candidates in the 2016 primary and general election.

According to NPR, during her confirmation hearing, Devos was questioned by Sen. Patty Murray about privatization:

Murray: “Can you commit to us tonight that you will not work to privatize public schools or cut a single penny from public education?”

DeVos: “Senator, thanks for that question. I look forward, if confirmed, to working with you to talk about how we address the needs of all parents and all students. And we acknowledge today that not all schools are working for the students that are assigned to them. And I’m hopeful that we can work together to find common ground and ways that we can solve those issues and empower parents to make choices on behalf of their children that are right for them.”

Murray: “I take that as not being willing to commit to not privatizing public schools or cutting money from education.”

DeVos: “I guess I wouldn’t characterize it in that way.”

Tell your Senators that children deserve a Secretary of Education who will promote high quality, free and public education for all students.

4. DeVos has lobbied to drain funding from public education.

In her home state of Michigan, Betsy DeVos has spent years lobbying to divert public school funding to voucher and private schools. She also pushed to allow for-profit charter school companies to operate with no accountability for public dollars. According to the Detroit Free Press article entitled “What you need to know about Betsy DeVos”–

A yearlong investigation published by the Detroit Free Press in June 2014 showed Michigan taxpayers pour nearly $1 billion a year into charter schools — but state laws regulating charters are among the nation’s weakest, and the state demands little accountability in how taxpayer dollars are spent and how well children are educated… Poor-performing charter schools in Michigan continue to get renewed, time after time. According to a Free Press review, almost two-thirds of Michigan’s oldest charter schools, those open more than a decade, are in the bottom half of state rankings.

Michigan’s Senator Peters, in a speech on the Senate floor, said the country needs a Secretary of Education “who is dedicated to improving access to quality public education” but said DeVos’ “only experience in education is her work lobbying for the transfer of taxpayer money to private schools and the rapid expansion of charter schools without sufficient accountability.”

The Senate will vote on the confirmation of Betsy DeVos on Tuesday, January 31st.

Tell your Senator that Florida’s students deserve a Secretary of Education that will fully invest in their public schools and support their success.