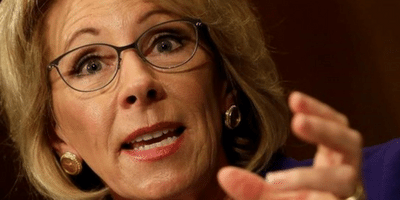 Betsy DeVos was confirmed by the Senate as the Secretary of Education today. Advocacy forced the vote to a historic 50-50 tie. Students need your voices now more than ever. Sign up today to stay informed and be an education advocate:

Read more about the vote from Roll Call:

For the first time ever, the vice president was called to Capitol Hill to break a tie on a vote to confirm a member of the Cabinet.

Vice President Mike Pence presided over the Senate for the first time since being sworn in just more than two weeks ago, and cast the tiebreaking vote, 51-50, to confirm Betsy DeVos as the next Education secretary. A vice president had never done so before, according to the Senate Historical Office.

That DeVos could not garner support from the Republican-led Senate underscored her weakness as a nominee, Democrats argued.

“She’d come into the department as a very weak secretary of Education,” said Connecticut Sen. Christopher S. Murphy, a member of the Health, Education, Labor and Pensions Committee. “I think to the extent she thought she was going to get major policy changes passed through Congress, that will be made much more difficult.”

But Republicans brushed off questions about whether it was problematic that DeVos barely passed the Senate.

“Not as long as we have the votes, it’s not a cause for concern,” Senate Majority Whip John Cornyn said Monday as the chamber girded itself for an all-night talkathon on the Devos nomination.

GOP leaders stood behind DeVos. On Monday, Senate Majority Leader Mitch McConnell encouraged his colleagues to support her, saying she “will be our students’ foremost advocate, working to improve our education system so that every child has a brighter future.”

Senate Democrats were unable to block DeVos because of their own actions in 2013 when they altered the procedural rules for confirming executive and judicial nominees — except for the Supreme Court. This ultimately allowed DeVos’ nomination to move forward by a simple majority vote to end debate.

Republican leadership did have to carefully time DeVos’ vote once it became clear that two GOP senators would oppose her nomination, leading to a 50-50 split. That pushed the vote ahead of Alabama GOP Sen. Jeff Sessions’ confirmation to become the next attorney general, since Republicans needed Sessions’ vote to keep the yeas for DeVos at 50 and cue Pence to break the tie.

GOP Sens. Susan Collins of Maine and Lisa Murkowski of Alaska both said they would opposed DeVos due to her inexperience in education. They also raised concerns about whether DeVos’ advocacy of charter schools and vouchers would hamper her ability to understand and address the problems facing public schools.

DeVos is a philanthropist who until recently, had led the American Federation for Children, a group that advocates school choice. She garnered attention at her confirmation hearing for not recognizing that the Individuals with Disabilities Education Act was a federal law; stumbling on a question about measuring growth versus productivity; and suggesting that guns should be allowed in schools to protect against grizzly bears.

Murphy said DeVos’ performance and her close confirmation vote could signal that she may not have much support from Congress moving forward.

“I can’t see Republicans rallying to her side as a political figure,” the Connecticut Democrat said. “So if she’s the face of any major changes in education policy, I just don’t think that she is likely to be persuasive with Republicans in the way that she might have been had her hearing gone differently.”

Senators said the uproar over DeVos’ nomination overwhelmed their office phone lines. Murkowski cited “thousands” of calls from Alaskans urging her to oppose the nomination.

The Senate Sergeant-at-Arms does not release statistics on the number of phone calls to Senate offices, but a source with the office said the high volume of calls caused some callers to experience delays or busy signals when being transferred to voicemail.