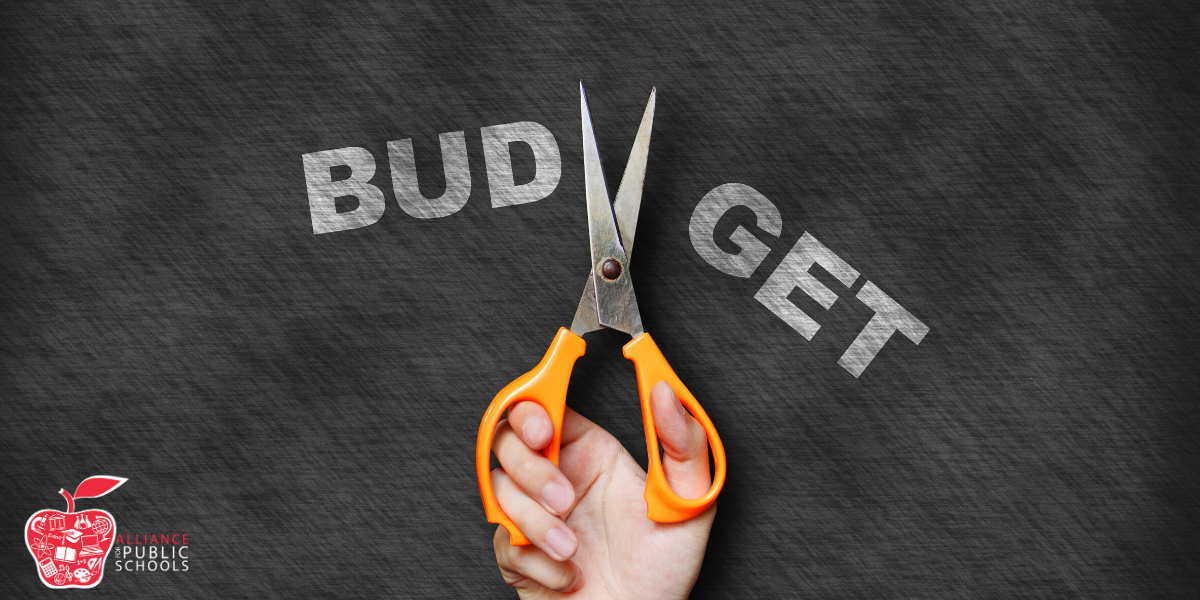 School leaders across the country are sounding the alarm on looming budget cuts. The pandemic has led to a national fiscal crisis predicted to be worse than the Great Recession. In 2010, Congress responded with nearly $115 billion in state stimulus money to stabilize education funding. To date, Congress has only earmarked $16 billion to states for education this time around with very little political will to do more.

“We know that in April, school districts nationally furloughed or laid off nearly half a million workers,” says Michael Leachman at the Center on Budget and Policy Priorities. “That is an astonishing number. It’s many more than lost their jobs through the entirety of the Great Recession. It’s all happened in one month.”

Act now: using our easy online tool, send your elected officials an email and demand that they act to protect students, staff and public schools.

Leachman says many of those affected have been bus drivers and school staff who were laid off as schools closed their doors for the remainder of the academic year. A lot of them obviously hope to return. “But, given the collapse in state revenues, it’s likely that unless the federal government steps in … many of these workers will never get their jobs back.”

Michael Griffith of the Learning Policy Institute estimates that if states slash education spending by 15%, schools could be forced to shed more than 300,000 teaching positions — almost 10% of the national K-12 teacher force.

Other school budget experts are singing a similar refrain, as are district leaders such as Austin Beutner ,Superintendent of Los Angeles Unified School District, who warned in his video address that schools would need the same emergency infusion of resources that hospitals and many businesses have already gotten.

“We’re looking at the same challenge in public education, and we need the same full-throated response,” Beutner said.

The two largest appropriation allocations at the state level are education and healthcare. Health appropriations make an unlikely target for state legislatures during a global pandemic leaving education in the crosshairs. State budgets rely predominantly on sales tax revenues and state income tax, if they have one. Both of these funding sources have experienced massive losses and states lack the ability to generate additional funds.

Schools receive nearly half of their funding from state coffers. But with businesses shuttered in response to the pandemic and the unemployment rate already nearing 15% — well above its 10% peak during the Great Recession — state income and sales tax revenues are crashing.

For April, the first full month of the coronavirus lockdowns, states are now reporting “really shocking declines” in tax revenues, says Michael Leachman at the Center on Budget and Policy Priorities. Some states have lost “as much as 25% or a third of their revenues compared to the previous year in the same month,” Leachman says.

And unlike the federal government, most state governments are required to balance their budgets. The result: Many governors and state lawmakers are now racing to implement deep cuts, including to school funding.

In early May, for example, Ohio Gov. Mike DeWine unveiled $300 million in K-12 budget cuts — and that’s just through June 30, when the current fiscal year ends. In Cleveland schools, according to Cleveland.com, that amounts to about $100 less per student with the possibility of more cuts in the new fiscal year.

A few days earlier, Georgia’s governor asked state education leaders to prepare for a 14% cut in funding starting in July. And in Michigan, a top Republican in the state Senate warned superintendents they could see their school funding slashed by as much as 25%.

The federal government remains the only place states can find budget relief in order to provide vital services for citizens. In comparison to its action over a decade ago, Congress is simply not doing enough and not working fast enough to stabilize what, by all indications, will be an unprecedented school funding crisis.

“Cuts to funding at schools will forever impact the lives of children,” Austin Beutner said less than a week after California’s governor called for emergency cuts in education spending. The harm children face from these cuts, Beutner warned, “is just as real a threat to them as is the coronavirus.”

Similar alarms are sounding in districts across the country. With the nation’s attention still fixed on the COVID-19 health crisis, school leaders are warning of a financial meltdown that could devastate many districts and set back an entire generation of students.

“I think we’re about to see a school funding crisis unlike anything we have ever seen in modern history,” warns Rebecca Sibilia, the CEO of EdBuild, a school finance advocacy organization. “We are looking at devastation that we could not have imagined … a year ago.”

TAKE ACTION TODAY. Use our online tool to easily send your elected officials an email. Demand that Congress do more to save our schools and support students and schools.