No teacher pay or summer programs if government shuts down 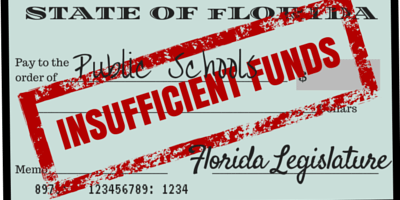 The 2015 Legislative Session ended in a budget stalemate when the House abruptly left the Capitol. The Republican controlled House and Senate are sharply divided over the issue of Medicaid funding. They have jointly agreed to return on June 1st for a special session to pass a budget before June 30th. Governor Scott has requested critical needs budgets from each of his agency leaders in case the legislature can’t comes to terms in time. This from the Tampa Bay Times:

But if their stalemate continues and Florida resorts to a bare-bones spending plan as suggested by Scott, results could be dire. Emergency Management director Bryan Koon didn’t mince words in his response to the governor: “These unintended and unforeseen consequences are numerous and would undoubtedly result in economic losses and could also directly result in the loss of life.”

Schools could be hit hard, too. Without state funding, it would be up to each school district to decide if and how to pay teachers, fund summer school and prepare for the coming school year, Department of Education spokeswoman Cheryl Etters said.

Districts could dip into funding reserves to keep paychecks flowing to teachers and other employees who are paid during summer break. Still, some teachers could have to wait until a budget is passed to be paid.

Legislative leaders are optimistic that they will resolve their differences but there have been no signs of either side giving in. The Florida Legislature has two Constitutional duties– pass a budget and provide a high quality public education. Because they have failed to do the former, they have put public schools in jeopardy.

Click HERE and sign up to stay informed on the budget and other issues that impact children, teachers and public schools.

Powerful commission and election will determine the future of Florida
July 7, 2017
Recent Posts
Search the blog
Go to Top
Translate »