Why don’t we treat teachers as professionals? 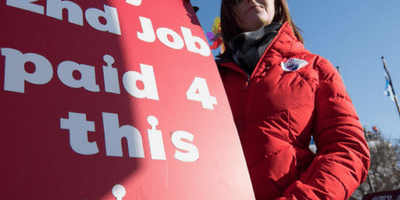 This year, the nation watched as teachers in numerous states began to walk out of schools and storm state capitals demanding better working conditions for themselves and better learning conditions for their students. Many of these states offered no collective bargaining rights yet educators were organized and angry.

West Virginia teachers ended their strike after an unprecedented nine days resulting in a 5% raise. They also defeated numerous bills designed to expand charter schools and weaken employee protections. Oklahoma teachers used social media to highlight the fallout from abyssmal funding- crumbling text books, four day school weeks and long working hours due to second jobs. They won raises and a nominal increase in student funding. Kentucky educators shut down schools by calling in sick after a controversial pension bill passed the legislature. This was followed by additional work stoppages as school employees protested at the state capital successfully demanding an override of the governor’s veto of a budget that called for a tax hike for education funding. The West Virginia strike spread to Arizona where 50,000 teachers descended on the state capitol. They wore #Red4Ed and rallied as music educators formed an ad hoc marching band playing “We’re Not Gonna Take It.” The strike ended with a new education budget and a 20% raise. Inspired by the other states, teachers in Colorado walked out and protested at the capitol citing ancient textbooks, a lack of computers, and low pay. The day before the North Carolina rally, the state Speaker of the House announced salary increases. The teachers rallied anyway and pledged to continue to hold politicians accountable.

The Harvard Business Review says there is more to the strikes and protests than employee salaries and benefits:

Poor pay, increased health care costs, and diminished pension plans are certainly core issues — teachers in Oklahoma haven’t received a pay boost in a decade. But these problems alone aren’t driving the protests. In every state where teachers have recently gone on strike, demands for increase school funding have been made. Disinvestment in schools has also been central to teacher strikes that have occurred since 2011, in Jersey City, Philadelphia, Chicago (twice), Seattle, Portland and Wisconsin.

The teachers’ position is that, under the cover of a commitment to improving schools, school district and local governments have instead closed neighborhood public schools, opened charter schools, instituted standard curriculum, mandated poorly thought out high-stakes standardized testing, attacked teacher tenure, instituted merit pay instead of annual salary increments, restricted collective bargaining rights, and subjected teachers to questionable and punitive evaluation schemes.  The result of years of “reform” has been modest improvement but little progress in national student performance.

This, it seems, is the tipping point and brings me to what I believe is at the heart of what is really happening here: Teachers are seeing their own experience be devalued by policymakers and other officials with little experience in the education field, and it’s not improving the education of their students. In other words, and as others have noted, teachers are balking at the erosion of their status as professionals. In fact, I would submit that it’s precisely because of their sense of professionalism that teachers are driven to an agonizing decision to withhold their labor. Teachers perceive themselves and their students being treated as fungible costs of production, cogs in a bureaucratic machine. To them, nothing less than the education profession is at risk.

The Harvard Business Review article speculates that the erosion of teaching as a profession began in 1983 with the release of “A Nation At Risk” from President Regan’s National Commission on Excellence in Education. This report claimed that public education was in crisis and required “external controls” to be placed on school systems and educators. Now, “teachers are increasingly directed to follow a mandated curriculum, abide by grade level or school district units of study, and follow predetermined lesson plans. In addition, test-based accountability has colonized teaching techniques and objectives, teacher performance evaluations are yoked to student test scores, and teacher training programs are de-emphasized. Teachers also have little influence over professional development content, school-wide organization, or school budget decisions.”

The author believes that today’s protests are more about educators’ reclaiming their profession and their place as education experts.

But with today’s protests, public school teachers are pushing back harder than ever against rigid definitions of professionalism. Instead, they are offering their own student-centered approach, combining training, context, flexibility, and a lifelong commitment to children and society. But the failure of elected officials and school boards to recognize a teacher-constructed professionalism is an invitation to endless conflict. This battle has implications for who sets educational policy and gets to decide the future of public education. The outcome of that struggle will assuredly determine the quality of the nation’s schools and, subsequently, the strength of our country’s democracy.

What do you think? Join our conversation on social media. Make sure to sign up to stay informed of issues impacting children, teachers and our public schools.