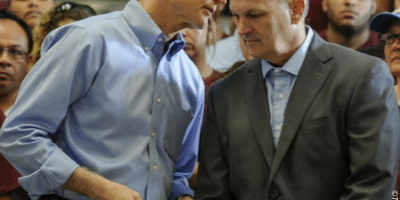 Governor Scott signed the controversial House Bill 7069 into law today at a Catholic voucher school in Orlando. The education bill makes sweeping changes to public education and most public education stakeholders spoke against it and urged Scott to veto the bill. Kristen Clark with the Miami Herald writes:

The bill will make it easier for privately managed charter schools to further expand in Florida and to receive additional taxpayer funding to boost their operations. It also includes a wide range of other provisions including daily school recess for most elementary school students and $30 million in extra funding to expand a voucher program that helps kids with disabilities.

The bill received broad support from House Republicans, school choice proponents — including charter school operators, whose companies would directly benefit from the legislation — and conservative political groups, such as two affiliated with the industrialist Koch Brothers.

But advocates of traditional public education — including superintendents statewide, almost all elected school boards, and parent groups and teachers unions — pressed the governor to veto the legislation.

They are concerned about a provision that will force districts to share with charter schools millions of local tax dollars earmarked for school construction, which critics argue will further diminish traditional public schools.

Furthermore, the Alliance, stakeholders and advocates were gravely concerned by the way the bill was crafted.

The manner in which the bill was cobbled together in secret by lawmakers in the final days of session also attracted intense scrutiny, with Scott himself calling the lack of transparency troubling.

The massive bill — which officially clocks in at 274 pages in its final form — was crafted behind closed doors by House Republicans and unveiled three days before the end of an extended session, with no opportunity for public input and no chance for lawmakers to amend it before the May 8 vote on

Senate Republicans, who reluctantly acquiesced to the process, said Corcoran insisted the bill be orchestrated as it was in order to lump together dozens of policy proposals that have nothing to do with the annual spending — such as a measure that requires daily elementary school recess, except for at charter schools. Corocoran denied political strategy in doing that.

Corcoran and House Republicans have justified pushing the bill through at the last minute by repeatedly — and falsely — saying all of its components were already vetted by the Legislature.

It is more important than ever for public education advocates to speak up for Florida’s 2.8 million students. Click here to email your representative and senator. Urge them to make kids and their public schools a priority when they return to Tallahassee in the fall.